from when smart girls do stupid things by LJ helpert 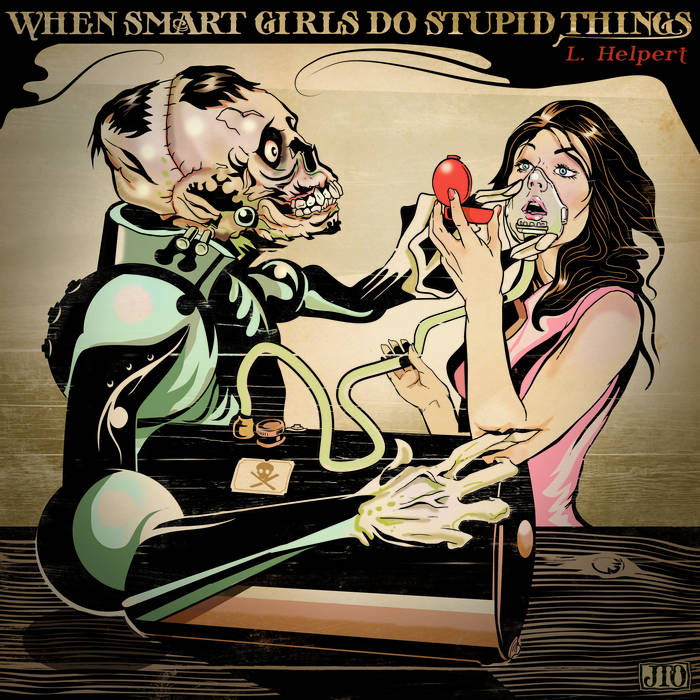 This is a Narrative Play Cartoon, about a boy-man who looks like Pink Panther a little bit. He (waddling across the carpet) swallows a toxic waffle as a child and grows up to be a Street-Mime Deaf-Mute Clown on the Ramblas (the main tourist drag) of Barcelona. With his painted face and hollow insides, he craftily steels the "sound"/expression from the sexy young ladies that "pound the pavement into peaches". Luring naive lasses' sympathy, he anesthetizes female wit with his converse charm---a pitiful, magnetic zombiness---and employs a custom (intrinsic) pattern "snatch apparatus" (flagellum-like pole) which attaches to the heart area of the unassuming damsel, sucking her melodic expression so that he can continue to Entertain the Masses (like a Musical leech.) So the fable goes, he, at last, unintelligibly ploys to steal the sound from a precious baby bird (who stars as "Me" in the song, in a lost verse un-sung). Besieged by the baby bird's cacophonous posse, he lives out the rest of his days as a scarecrow, perched far from his glass facades and illustrious street fashion, in the lost lands where Old Charge-less Batteries go to never die.

Well You Know You Never Did
Anything You Said
And Though Your Words Were Worthless
It's Much Worse
Under Surface.

You Swallowed Something Awful.
As A Toddler When You Waddled
Cross The Carpet
For A Waffle
And You Couldn't Read The Lable.

So Grew Up
Like A Clown
Street Miming, Stealing Sound
From The Ladies
Who Pound The Pavement
Into Peaches.

Well Your Face
Is Painted In One Expression
Innocent In Need Of Affection
And Stage Make-up
Highlights Your Thick Brow
That Suggest Yes
You'd Like To Get It Up
In The Bow-Wow.

Your Hands
Skillfully Unwrap The Package
And Reveal The Tiny Instrument
That Somehow In Ten Minutes
Is Designed To Suck All Happiness
From The World's Most Mellifluous Damsels
Extracting Sound Like A Musical Leach, Yes
From The Ladies
Who Pound The Pavement Into Peaches.

*recorded and first mixed in Barcelona at Emergency Studios with Dave Bianchi and Whatabout Music
*re-mixed and mastered in Berkeley, California with Charlie Wilson at Sonic Zen Records